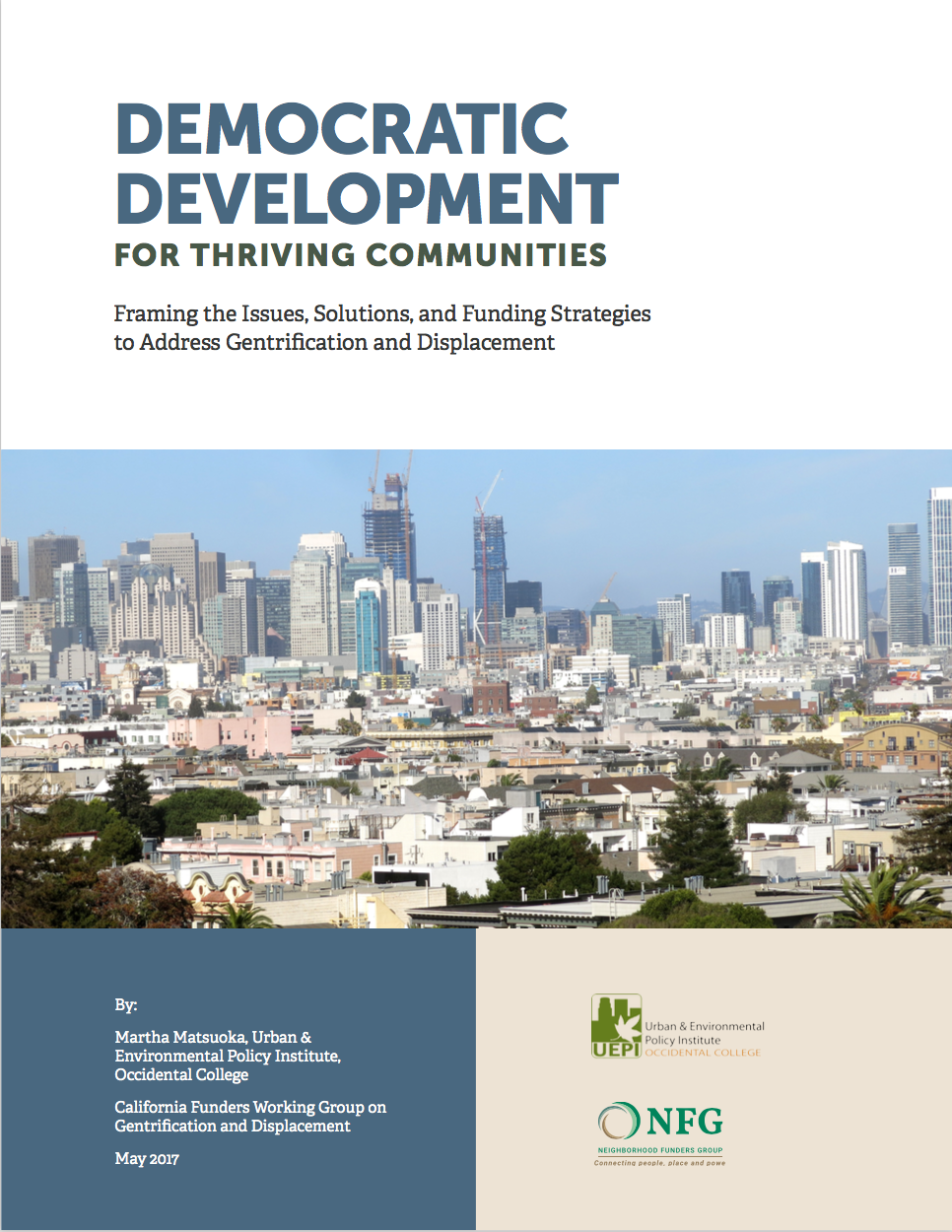 Access the executive summary and the framework graphic from the report.

This report builds on previous work from the organizing, academic, and philanthropic sectors to present a framework for philanthropy to consider in strategically addressing gentrification and displacement. While the analysis presented here emerged out of discussions about the housing crisis and neighborhood change now underway in strong housing markets in California, this framework intends to illuminate and inform neighborhood changes occurring across a range of cities and regions across California and throughout the U.S.

New public and private investments in cities—from housing to transportation to parks and open space—have triggered changes in property value, speculation, and development in neighborhoods, particularly those historically ignored and suffering from long-term urban disinvestment. Unfortunately for low-income, working poor, and working class communities across the country, these investments tend to do more harm than good. The gentrification of these neighborhoods creates a new housing crisis that threatens the ability of long-time residents to afford housing and shelter, maintain an economic foothold in their neighborhood, preserve family and community ties, and organize together for community stability and change.

This framework identifies four mutually reinforcing systems that define the process of gentrification, displacement, and neighborhood change. These include market-driven development, government policy, structural racism, and unequal power dynamics. The role of government in development has shifted from a regulator and distributor of wealth and public goods to one focused on providing favorable conditions for capital investment in cities. Power held by developers and investors outweighs the limited power of longtime residents to participate in and influence the market, engage in policy decision-making, and shape the public policy debates based on their own lived experiences.

The report asserts that the same drivers that facilitated gentrification and displacement can be interrupted and/or redirected toward more inclusive development goals.

Key components of this agenda include:

For funders committed to building long-term resilience and vibrancy in underserved communities, there is no single magic solution or policy approach. However, this report suggests that resourcing power building strategies to address gentrification and displacement—and development more broadly— represents a strategic approach that pushes beyond housing as a single issue and creates opportunities to build broad strategic coalitions.

Our analysis advises funders to support strategies that:

A number of foundations and philanthropic initiatives around the country are grappling with the scale and urgency of displacement pressures in their communities. We hope this report will serve to support these colleagues in understanding a range of policy and investment choices to address gentrification and displacement, and to advance community-driven development that grows the capacity of low-income people to gain the power they need to define the conditions that shape their lives.